How To Deal With Freezing Pipes

Posted on May 25th, 2018 by ewscustomtheme
How To Deal With Freezing Pipes 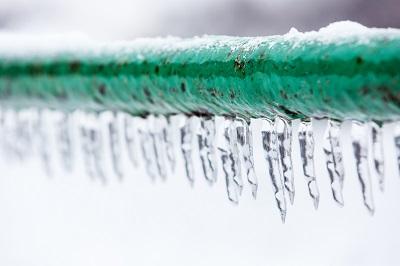 Preparing Your Pipes For The Cold Season

Why are we writing about freezing pipes when summer is just getting started?

So you can be prepared for the cold months when there’s a real possibility of it happening to your home. Every year, we and other plumbers get calls from people who wake up one winter morning to find out their water is trickling out of the faucet, or not coming out at all.

Here’s what to do if you think your pipes might be vulnerable to freezing temperatures.

How To Prevent Frozen Pipes

For homes where frozen pipes are a real possibility, there’s a protocol worth following. By sticking to a few simple steps, your pipes and plumbing will be 100% okay throughout even the coldest temperature we’ll experience in Vancouver, WA. Here’s how you keep your pipes warm enough to keep working during the cold months.

For most people, the first thing to do when they know the temperatures are going to drop is to let the water run at a thin stream.

The reason for this is not only because running water is harder to freeze, it’s because when water does freeze, it expands.

Running water keeps the water line open, which gives the ice room to expand out of the pipes instead of against the wall of the pipes. Freezing water can produce as much as 2,000 pounds per square inch – more than enough to crack a metal pipe.

It’s more common to run cold water than hot water when the temperatures drop. That’s only because cold water is closer to freezing and therefore more susceptible. It’s also more readily available, as hot water tends to be in more of a limited supply. So should you even worry about hot water?

Even though it does get cold, the Pacific Northwest typically doesn’t usually get cold enough to cause the hot water to freeze over.

But it doesn’t hurt to be safe because there are situations where it can happen. While most homes will use the water heater frequently enough to keep the pipes warm, if it isn’t in use or it stops running because it’s being used too much, your hot water system could freeze.

If exposed to the cold, your water heater itself might even freeze. Talk about cold!

Again, this is all unlikely in the PNW, but it’s good knowledge to take with you if you find yourself somewhere where extreme temperature drops are more common – or if you ever experience a freak cold snap that lingers.

So just remember: Step One – keep the water running.

Pipes freeze when they come in prolonged contact with freezing air. That means the first thing every homeowner should do to keep the pipes from icing over, is to insulate them.

Wrapping exposed pipes in an insulating material will do the most to keep your pipes from freezing. This is especially important for pipes that are located outside, or in parts of the home that don’t receive heating – often crawlspaces, garages or basements.

Most hardware stores will sell products designed to keep your pipes warm. If you can’t get to the store in time, though, bundling your pipes in old rags should get the job done.

Yeah, heat can be expensive. But what’s more expensive is dealing with a burst pipe. For homes vulnerable to frozen plumbing, it’s recommended not to let the ambient temperature of the home drop below 55 degrees.

For parts of your home that are unheated, add insulation to those areas or use space heaters to fend off icy air from reaching your pipes. There are also electric heating coils that can be wrapped around pipes to keep the cold at bay.

4. Turn off the main water if you leave.

If you know you’ll be leaving the home for more than a day and the temperatures will be dropping, the safest thing to do is to let the water run from the home and then close off the main water line.

What this does is remove the existing water form your pipes and make sure new water doesn’t come in. After all, it’s not the frozen pipes that are the problem, it’s the frozen water inside that is. So if your plumbing as been drained that takes care of the problem.

What To Do If Your Pipes Do Freeze

You’ll know you have frozen pipes because a) it’ll be cold but more importantly b) your water won’t be flowing as it normally does. Putting two and two together will tell you you’ve got a problem.

If you find that your water isn’t flowing at all following a hard freeze, the first thing to do is find out if there’s been a rupture somewhere along the line. The rupture could be anywhere. It could be under a sink or in the garage and easy to spot, or it could be outside the home or in a wall where it’s impossible to find without some exploring.

If you suspect a pipe has burst in your home, turn off the water immediately.

If you don’t know where the main water shut-off valve is, call a plumber. If you neglect to turn off the water, the pipe could still be letting water flow freely into your home.

After you’ve turned off the water and confirmed with 100% certainty that there is no rupture in the line (which might not be possible without a plumber), then you’ve got to slowly warm up your pipes. There are a few ways to do this.

Identify which pipes are frozen

Determining which pipes are frozen is a process of elimination. Check each water fixture to see which ones are flowing. If you can reach any of the pipes, touch them to see how cold they are. Be careful not to grab a freezing cold pipe.

If none appear to be operational, it’s most likely the main water line outside the home that’s been affected. 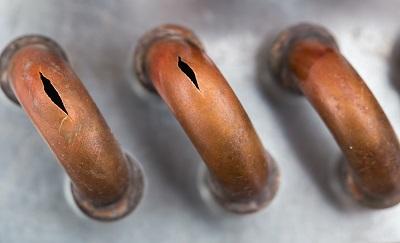 Gradually heat up your pipes

Now is a good time to open up your faucets and give your pipes some breathing room. If they’re going to be heating up, that means there’s going to be steam. Steam can also burst pipes if it’s got nowhere to go – especially if it’s stuck inside with ice.

If the temperature rises, the problem will take care of itself.

If it’s holding steady, though, you’ll have to warm them up manually. Running the hot water would be good – but the water’s off, remember? You’ve got to think about how to warm up the ambient temperature around the pipes.

If you haven’t already, now is the time to break out the space heater. Be sure not to place it too close to the pipes, as some of them can get pretty hot and may actually warm them up too fast, which can also cause damage. You may be tempted to pour hot water on them, but avoid that as well.

A slow but consistent warming of your pipes will get your water flowing like normal. After warming up your home, turn the water back on and let it flow to get your pipes back to a good temperature.

What Happens During a Repipe?
|
Two DIY Plumbing Fixes